We aim for making the excellent cigarette in Vietnam.

What is a cigarette?

Not all cigarettes are the same. Smokers around the world prefer many different tastes and strengths. British American Tobacco in Vietnam aims for excellence in every step of manufacturing.

BAT team always set a significant mission and strategy in well understanding the preferences of targeted smokers who are of course the adult consumers, for purpose of designing and producing the most suitable cigarettes with the best tastes to meet particular demand of a wide range of customers. It’s the preferences of adult consumers to guide our tobacco blends – the mix of tobaccos that we use – and we are resilient on this matter to ensure that these grades are available long-term to keep the tastes of our products consistent.

Food-type ingredients and flavourings are added to some types of cigarettes – typically American style blends – to balance the natural tobacco taste, replace sugars lost in curing and give individual brands their characteristic flavour and aroma. Other ingredients are used control moisture, protect against microbial degradation and act as binders or fillers.

The filter, paper and level of filter ventilation are all chosen to affect the sensory strength and smoke yield of the cigarette. At each stage, there is constant quality control and testing.

Main components of a cigarette

Tobacco blend includes tobacco lamina (the flat part of the tobacco leaf) and tobacco stem (midribs of the leaf).

The filter is made mainly from cellulose acetate fibres, known as tow. Cellulose acetate is derived from wood pulp. The fibres are bonded together with a hardening agent, triacetin plasticizer, which helps the filter to keep its shape. The filter is wrapped in paper and sealed with a line of adhesive. Sometimes charcoal is added to filters.

Design adjustments achieve different strengths and tastes, and can reduce smoke yields of various smoke components, as measured by a standardized machine method.

What happens when a cigarette burns?

To understand cigarette design, it helps to know how a cigarette burns. It is the combustion process – the burning of the cigarette – that produces tar. If hay were burned instead of tobacco, it would also produce a type of tar. When an item burns, it produces tiny particles mixed with gases – this is smoke. A cigarette filter traps some of these particles.

When a smoker puffs on a cigarette, whole smoke, including both fine particles and gases, is sucked through the tobacco rod and the filter. Gases pass through the filter and some particles are trapped in it. It is this particulate matter, exclude nicotine and water, that is called tar. 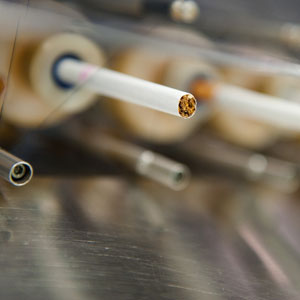 Smoke has over 4,000 constituents, many of them also found in the air we breathe and in our food. These constituents include the emissions listed on packs, such as tar, nicotine and carbon monoxide. Water vapour is also produced by the combustion, because the burning of any organic material breaks down the chemical components and produces water.

Several factors can influence the smoking characteristics, including the variety of plant, how it is harvested and influences such as soil, climate and weather. All these can affect the tobacco’s taste and aroma.

Doing business and manufacturing in a friendly way towards the environment and community is a top priority of British American Tobacco in Vietnam.